A Pennsylvania homeowner has claimed this surveillance video shows an Amazon delivery person dropping off a package at his door, but swiping another package on her way back to the van.

The unnamed homeowner said the incident occurred on December 21 in Morrisville, Pennsylvania. 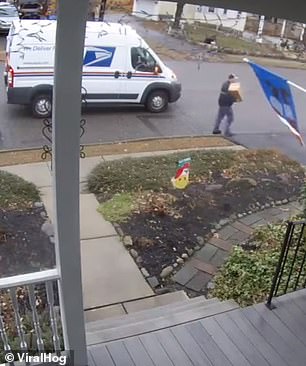 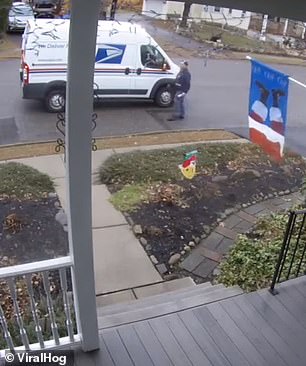 ‘I was delivered a gift package from my Dad for Christmas, which included gifts for my wife as well, via USPS,’ the homeowner wrote in the video’s description on ViralHog.

‘An Amazon worker came 20 minutes later, dropped off a different package I had ordered, and took the package that USPS delivered.’

In the surveillance video, a USPS mailman can be seen carrying a medium-sized brown cardboard box from his van and to the side of the home, out of view of the camera. He then returns to his van empty handed, having completed his task.

Sometime later, a white U-Haul van appears and is parked in front near the home.

What appears to be a female wearing a bright-yellow vest then emerges from the van, pulls out a package and then walks the same path that the USPS worker did earlier in the day.

The woman than reappears on camera, nonchalantly holding a medium-sized brown cardboard box, similar in size to what the USPS mailman dropped off, carrying it back to the U-Haul and then driving off.

It is unclear from the video whether the woman is actually an Amazon employee as no Amazon logos are visible on either the U-Haul or her clothing.

Amazon delivery people have been known to use U-Haul trucks to delivery packages, however.

3
IRCTC ticket booking: Get cheaper ticket through IRCTC, Know how